The Virgin River drains much of Zion National Park and then flows past St George, Utah, where it is joined by the Santa Clara River. It continues south through the dramatically beautiful Virgin River Gorge on its way to joining the Colorado River which is now beneath Lake Mead.

The Virgin River South area offers a number of sites to the east of the Virgin River and west of Virgin Peak in the starkly beautiful area known as Gold Butte. We also explored an area off its west bank near Overton, Nevada. None of these sites is formally designated as public, though many are well-known and frequently accessed.

Falling Man in the Whitney-Hartman area of Gold Butte is well-known. It has a designated trailhead and site steward. It is the featured site in our Solar Interactions Niche.

Camping is permitted, including graded sites at Whitey Pockets. There is an active campaign to have the area afforded more Federal protection. The area is becoming slowly more regulated with designated routes and fenced trailheads. No doubt this irritates any number of people and communities, and it does make it more difficult to get to some of the sites. On balance, the restrictions do not seem unduly burdensome, though they do make it more difficult for the elderly to visit sites they used to be able to do relatively easily. 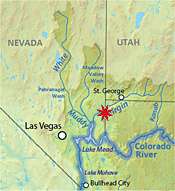 Responsible agency is the Las Vegas Office of the Bureau of Land Management. Facilities are located at Mesquite, Nevada, Fuel to and from Ls Vegas at Glendale, Nevada and the Moapa Travel Center.

Approximate travel time to base at Mesquite, NV: 82.4 miles; one hour, 13 minutes.