Well within sight of the lights and action of the Las Vegas Strip and the Fremont Experience in downtown Las Vegas, Nevada, are two canyons that hold remarkable collections of ancient rock art. Sloan Canyon and Brownstone Canyon are National Historical Sites. A third major site is on privately-held land. Farther afield, but still less than an hour and a half away, are the Valley of Fire, northeast of Las Vegas, and Grapevine Canyon, near Laughlin, Nevada.

Prominent clusters of rock visible from most parts of the Las Vegas Valley are known for spectacular rock art panels. For those of us who have had the profound experience of exploring these sites, we are no longer able to drive the Las Vegas area without an enduring sense of connection with a distant past. Indeed, in the Summerlin area of Las Vegas, rock art from this region embellishes overpasses along CC-215. A distinctive glyph from Sloan Canyon embellishes an I-15 overpass just as Las Vegas comes into sight coming in from Los Angeles.

Southern Nevada is in what is known as the Basin and Range Province. Though much of our rock art is described as Great Basin archaic style, the Las Vegas Valley is drained by the Las Vegas Wash, which flows to the Colorado River. (A basin has no rivers flowing to a sea)

The Vegas Valley is bounded by the Spring Mountains and Red Rock Canyon to the west; Frenchman Mountain, the Muddy Mountains, and River Mountains to the east; the McCullough Range to the south; and the Sheep, Las Vegas and Arrow Ranges to the north. Further to the north and east are the Muddy, Virgin, and Colorado Rivers.

Trailheads to many of these sites are well less than an hour from the Las Vegas Strip. Many of the sites, though not individual glyphs, can be seen from paved roads. In some instances, once one knows where they are located, the general area where rock art sites are located may be visible from within the city itself. They are that close, yet very much isolated from modern life.

Most rest in splendid silence, where they have resided for centuries. Remarkably few residents of Las Vegas a 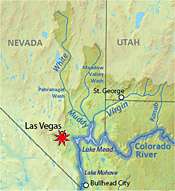 nd fewer visitors even know they exist. Without exception, the niches they occupy are places of peace. There are volunteer site stewards, who visit their site at least quarterly. I am steward for one of these sites.

The Las Vegas Valley Niche includes major sites to its west and north in Red Rock Canyon, including Red Spring and Brownstone Basin; a number of sites where traces of the Old Spanish Trail remain; adjacent sites in Little Red Rock, which are on privately owned-property; and Sloan Canyon, a public site, to the south. Two of these sites are on the National Register of Historic Places: Sloan Canyon and Brownstone Basin.

Major rock art site, including one on the historical registry, are located on the nearby Nevada Test Range, sadly so near, yet so far beyond civilian access.