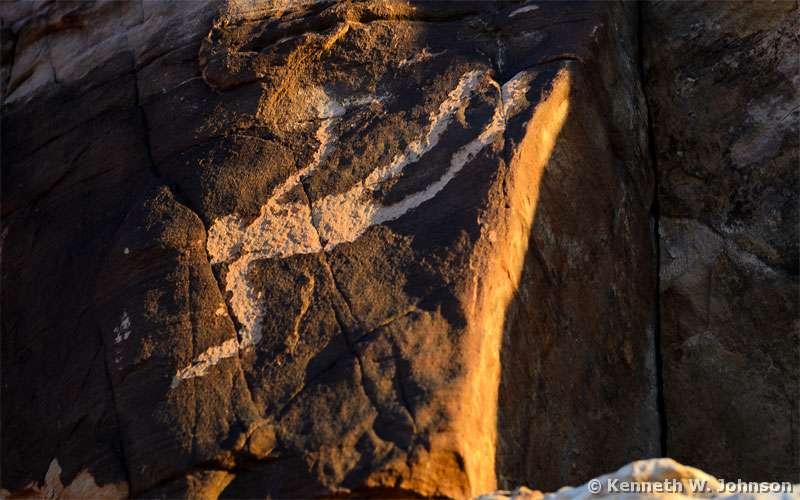 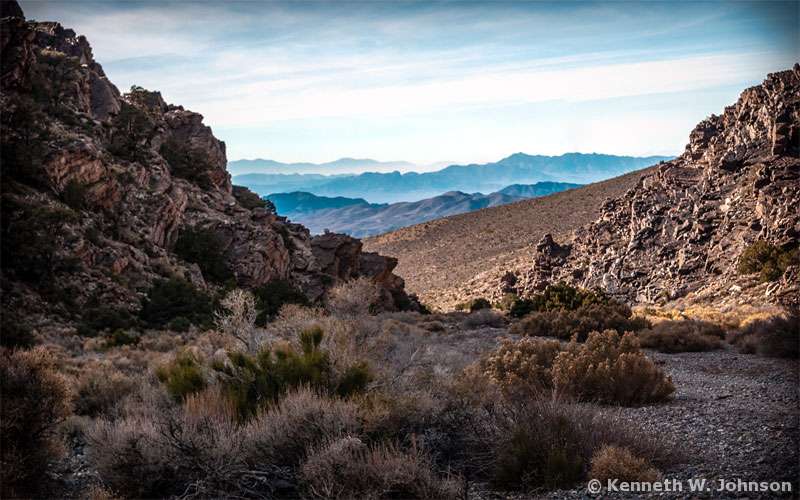 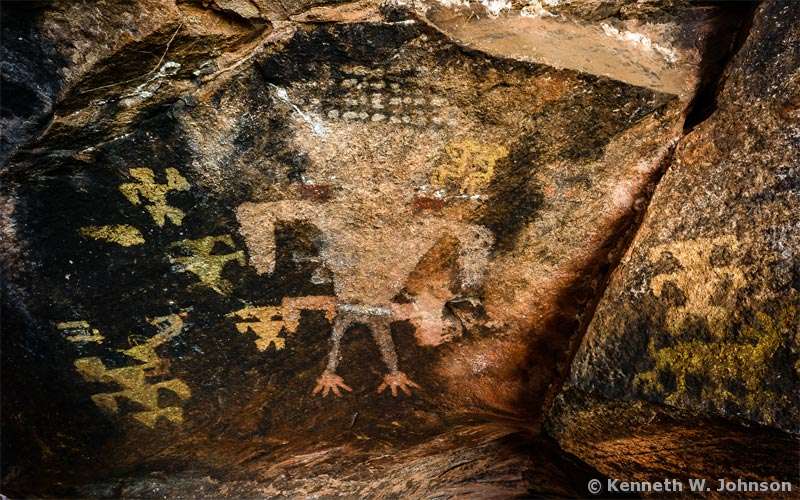 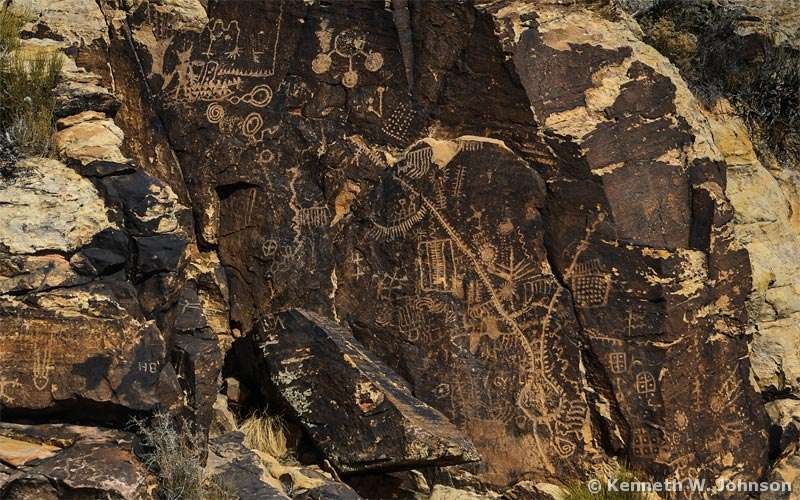 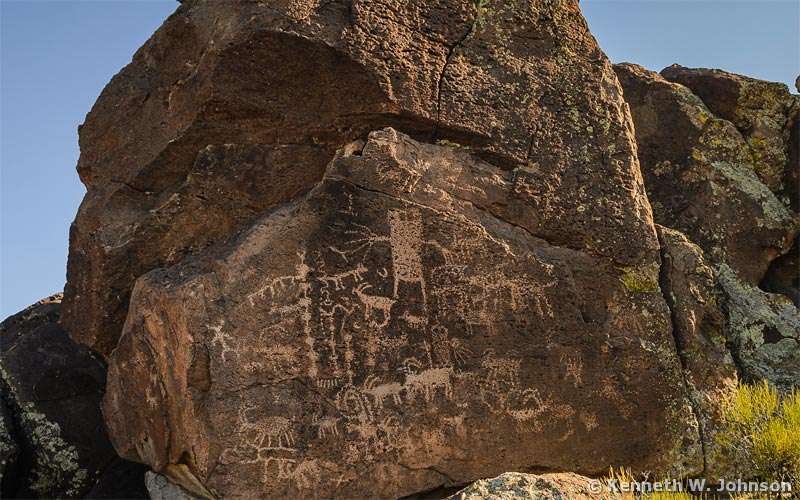 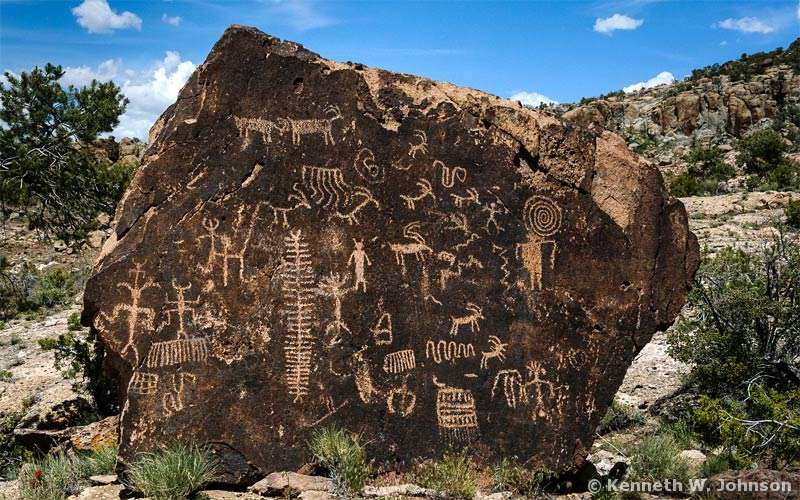 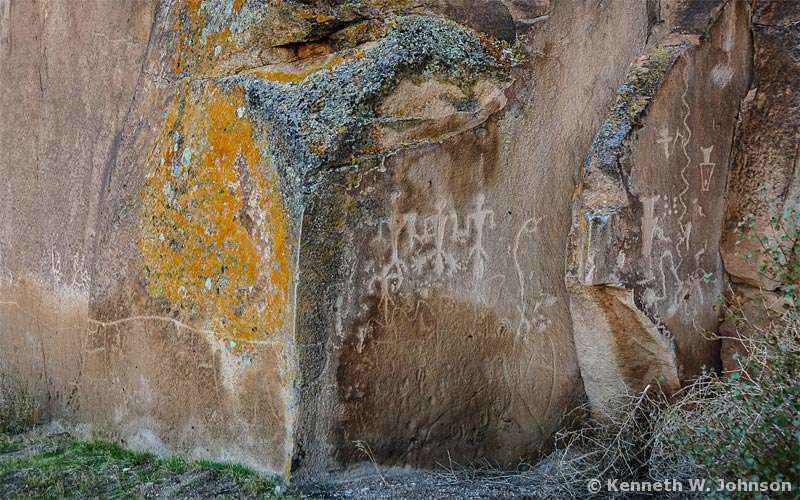 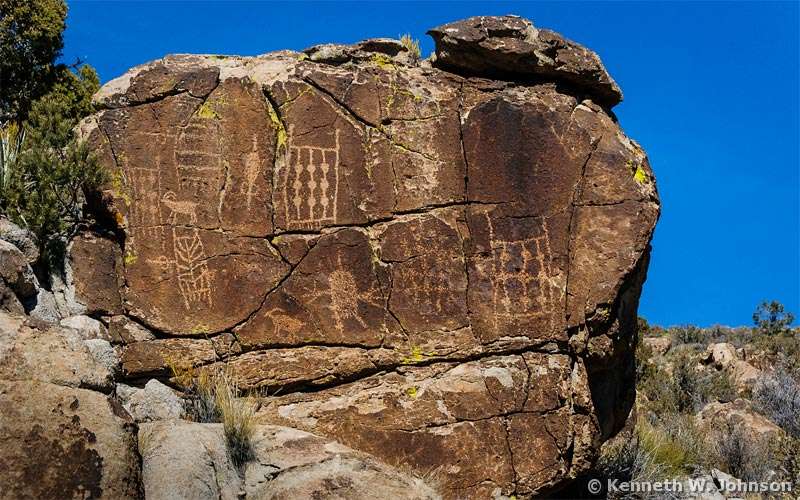 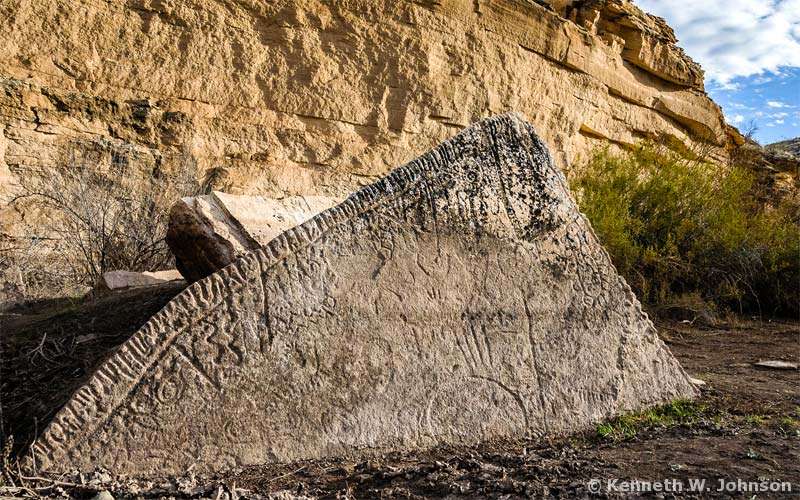 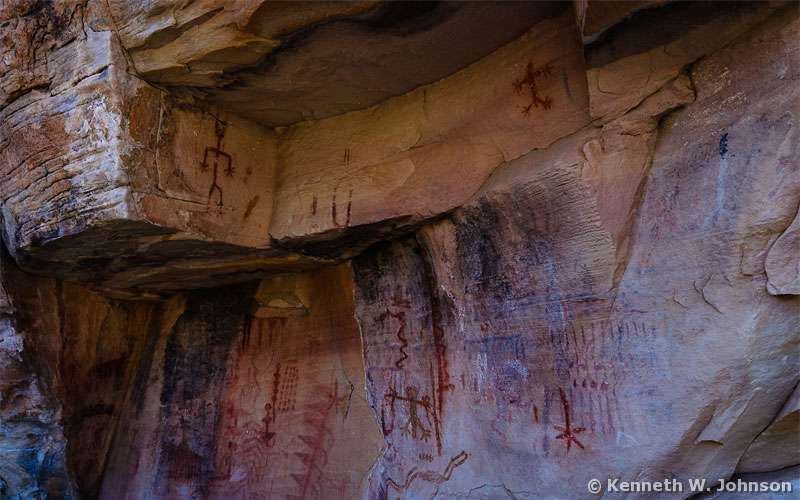 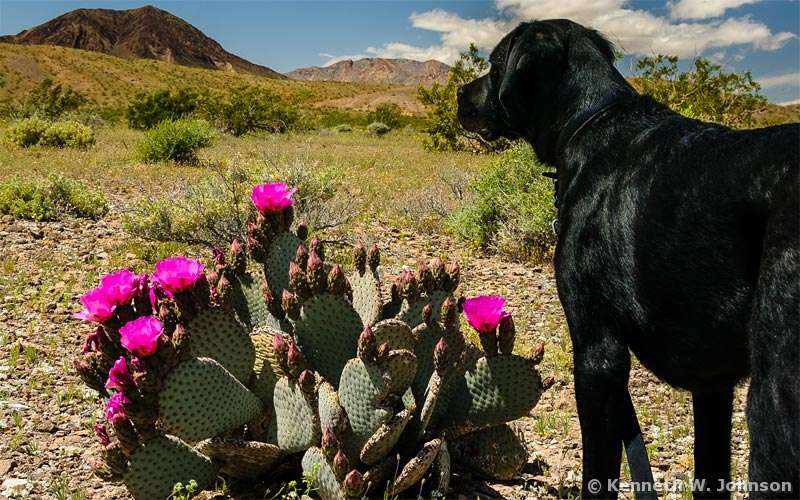 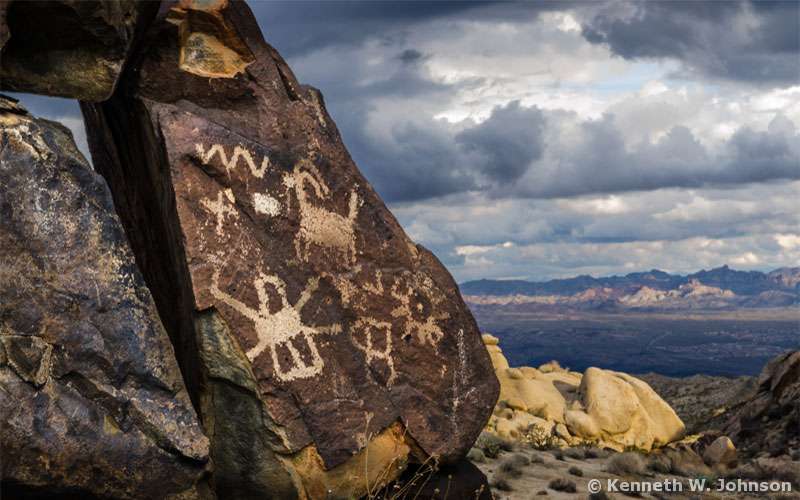 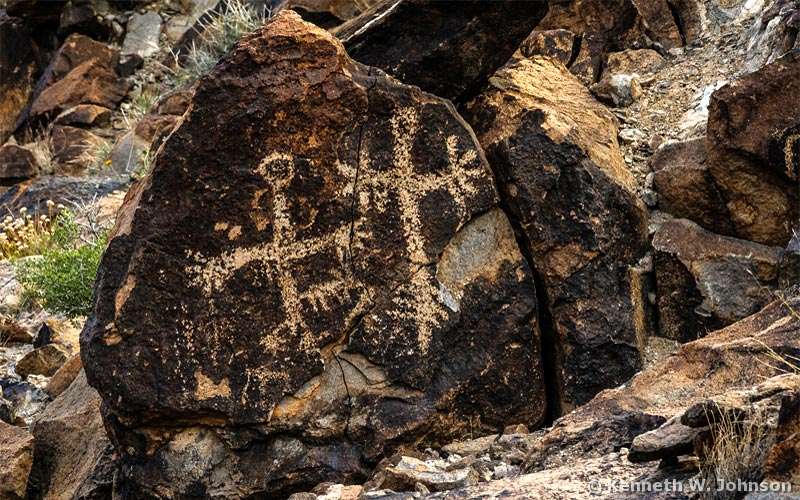 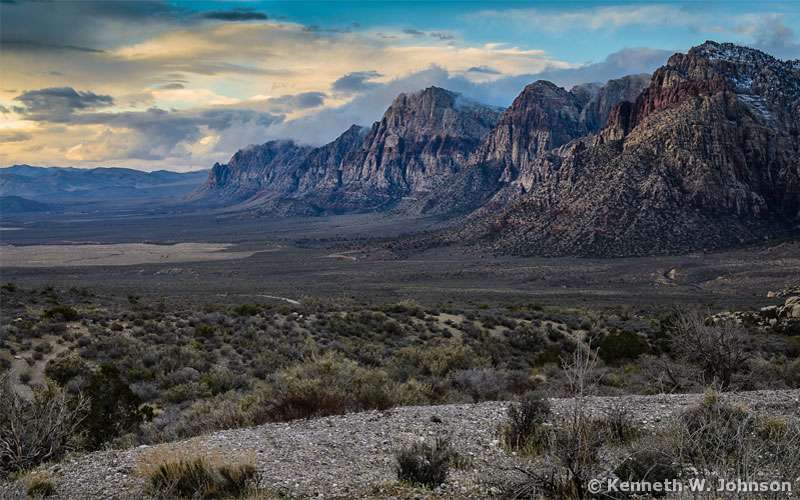 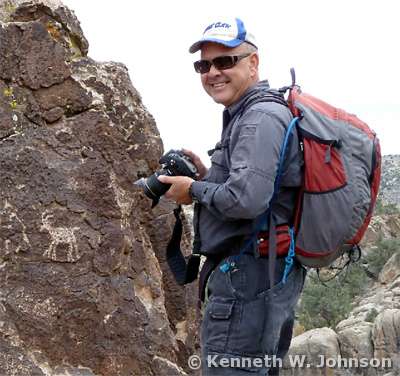 Kenneth Johnson, creator and author of VegasTraces.com, passed away suddenly on June 21, 2015, at the age of 69. As he had done many times in recent years, Ken was on a solo field trip to document and photograph remote rock art sites. While on a rough dirt road in Davis Canyon, just outside of Utah’s Canyonlands National Park, his vehicle became stuck in sand. While attempting to dig out his vehicle, Ken apparently suffered a fatal heart attack. When the authorities found him six days later, he was sitting under a nearby tree with his shovel still in his hands. Therefore it’s assumed he passed quickly and peacefully.

Ken was a Renaissance man in its truest sense (” An outstandingly versatile, well-rounded person. The expression alludes to such Renaissance figures as Leonardo da Vinci, who performed brilliantly in many different fields.”). He was a soldier who served multiple combat tours in Vietnam and ultimately rose to the rank of Colonel in the U.S. Marine Corps. He was also a brilliant man with multiple advanced degrees who wore many caps in his post-military years, including lawyer, author of papers and books, teacher, speaker, consultant, businessman, and in his final years, rock art buff extraordinaire. Through all of these, he was an advocate for ethics and the exercise of personal and public responsibility. These included Organizational Ethics for government and the private sector, Strategies for Responsible Business, and most recently, Popular Stewardship for the preservation of our cultural resources.

Just before his death, Ken was starting up the Steven Wallace Johnson Center for Popular Stewardship to advocate for his beloved rock art sites. The Center is named for Ken’s brother, Steve Wallace Johnson, who died tragically in 2013 under similar circumstances. Both men were off adventuring alone in the desert, each vigorously pursuing his respective passion until the very end.

Ken Johnson had stated, “The Center’s … purpose is to foster a sense of Popular Stewardship — the idea that private citizens, including … tourists, have an inherent responsibility to do what they can to understand, appreciate, and preserve our natural and cultural resources. Abdicating personal responsibility to often distant politicians and agency employees … is not an option. We need to see ourselves as popular stewards or stewards-at-large.”

Ken’s passing is not only a loss to his family and friends but to the world in general, which sorely needs more men like Ken who throughout his life had the courage to stand up and be counted for what he believed in.

A Journey of Discovery…

For millenia, the Las Vegas Valley has served as a crossroads of ancient routes facilitating trade, ritual and exploration. Hunter-gathering native families, Spanish explorers and traders from Santa Fe, American trappers and military expeditions, and Mormon settlers have all followed ancient routes along major watersheds. The Las Vegas Valley, its once flowing springs, and ancient regional trade routes formed a vibrant network of human activity over these thousands of years, often memorialized by panels of rock art: petroglyphs and pictographs. There are three major sites within the Las Vegas Valley itself and dozens of other significant well-known and many other lesser-known sites, perhaps even some yet to be discovered, within an easy drive time from Las Vegas (less than two and a half hours to the trailhead). Sites are to be found within that range in Nevada, Utah, California, and Arizona along major water sheds. See “Introduction to Niches,” above right.

We want to invite Las Vegas residents and visitors to join our community: to explore the scenic areas and appreciate the cultural resources that radiate from this valley. We do so, however, with some concern. The rock art and the niches they occupy are delicate. We are trying to find the balance between stimulating interest and protecting valuable natural and cultural resources. In more philosophical terms, we are trying to find the harmonious balance of aesthetics, ethics and policy surrounding rock art in our region.

It is true that sites have been “loved to death,” and the best way to preserve them is to keep the fact that they exist and directions to them closely-held secrets. But we firmly believe that what people learn from these pages will encourage them to be appreciative, thoughtful and responsible. If we are successful, we will develop a body of informal “site stewards” such that the irresponsible will never be able to know when someone concerned enough to notify authorities might be at any given site.

In that vein, due to the vulnerability of this rock art and the surrounding areas, only well-publicized sites are identified by their common names in these pages. All others will be identified only by the broad geographical region they are located in. For the moment, we will give no directions to sites, even public ones.

So, you are invited to a dance: a Journey of Discovery. It is much like a “passionate tango” in which porteños are fond of describing the lead and follow as the offering and receiving of “intention.”  Throughout this site, it is our intention to lead with a slow deliberate quality around dozens of wonderful niches that contain rock art in the Eastern Mojave Desert that surrounds and includes the Las Vegas Valley. If you choose to follow our lead, you may develop your own joy of discovery, appreciation and understanding of the niches of wonder that lie hidden in this unique locale, paradoxically only mere miles from one of the most urbanized cities in the world. Your journey begins with an Introduction to Niches in the right-hand corner above.

Over American literary and artistic history, what is known as the “Desert Aesthetic,” celebrated a broad, spectacular, wild and hardship view of the early American experience in the Desert Southwest. In these pages, we are moving toward a narrower, more intimate, and more evocative experience of the Desert Aesthetic as a dialogue across the ages in thought, word, and action. We are privileged to be a part of this dialogue to the extent the sites remain open to the public.

While the rock art of this region is truly remarkable, the canyons that nurtured the artists and sheltered the art itself for millenia are remarkable in their own right. These canyons usually provided at least seasonal waters. They always provide “canvases” of fractured rock, from 650 million year old limestone to five million year old volcanic rock.  The ancient artists frequently used the facets of rock to highlight or even form the rock art. It is the rugged locations and faceted rock surfaces that showcases the rock art. Indeed, these natural canvases can be works of art in and of themselves.

We will explore the broader environment these remarkable panels occupy. These desert environments are home to the ultimate survivors, We will explore the flora and fauna of these regions, alert to the differences that altitude and available water bring. Even the time of day and season that a site is visited will color the sense one takes from the venture. We will be alert to the play of light and shadow to track the passage of the seasons or enhance the narrative of panel or glyph. From time to time, we will touch on the challenges of capturing these contexts digitally.

Indeed, the experiences one takes from a visit will be an integral part of the memories one holds. Sometimes, late at night, we can see in our minds’ eyes the panels resting in the cool desert air as they have for hundreds of years. Always, as you drive the busy streets of Las Vegas, you will now see in the distance canyons that you know hold remarkable visions from a distant past.

These pages are an experiment in civic responsibility. If we are successful, we will have developed a community of families, service organizations, researchers, agencies and explorers accomplished in responsible stewardship for these enduring, yet delicate cultural resources. So, please explore these pages in that sense.

Click Trip Reports on the menu bar above to read about our latest adventures.